1884
Construction began on a small mission church on Flatbush Avenue, in Flatlands.
January 1885
Saint Thomas Aquinas, the mission church of Holy Cross, opened.
January 18, 1885
First Baptism was recorded.
January 29, 1885
First marriage was recorded.
May 31, 1885
Bishop Loughlin dedicated the church.
November 1891
First pastor, Rev. Edward W. Dullea, was assigned. Parish boundaries extended as far north as Holy Cross, on the east to Holy Family in Canarsie, on the west to Saint Mark’s, and on the south to Jamaica Bay.
1896
Flatlands became part of the city of Brooklyn.
1898
Brooklyn became part of New York City.
1901
The parish had 150 parishioners. Sunday Masses were at 8:00am and 10:30am.
1909
The parish had 700 parishioners.
September 12, 1924
Saint Thomas Aquinas School, on Flatlands Avenue, opened with 362 students in grades one through five. (This building eventually housed the Girls School, and became known as the Father Kehoe building.) The Sisters of Mercy staffed the school.
1924
Resurrection parish opened.
1926
Saint Thomas Aquinas Convent was completed, and the Sisters of Mercy moved in.
1927
Parishes of Good Shepherd, Our Lady Help of Christians, and Mary, Queen of Heaven opened.
April 1930
The new church on Hendrickson Street and the rectory were completed.
October 30, 1932
Bishop Thomas Molloy dedicated the new church with its 155-foot tower.
1930’s
The pews were removed from the original church (now known as the Little Church) on Flatbush Avenue, and it was turned into a gymnasium.
September 1944
The Brothers of the Holy Cross arrived to teach the upper grade boys in the school.
1940’s
The original church was restored as a place of worship.
1946
A Missionary Cenacle for the Missionary Servants of the Most Blessed Trinity (the Trinitarian Sisters) was established on Coleman Street, in the building later known as the Golden Age Center.
1955
Construction began on the school building on Hendrickson Street (housing the Boys’ School and later known as the Msgr. Pote building), the Auditorium (later known as the Msgr. King Hall), and the Brothers’ Residence on Flatbush Avenue.
August 1956
The Missionary Cenacle was closed.
June 15, 1958
Bishop Bryan J. McEntegart dedicated the Boys’ School, Msgr. King Hall, and the Brothers’ Residence.
1962
Vatican Council II introduced many changes to the life of Catholics and to the Liturgy.
1965
Sunday Mass attendance was 9,000. The school enrollment was 2,200.
1967
The Folk Mass began.
1968
The first Parish Council is formed.
1968
Lectors began their ministry in the parish.
1969
Reconstruction and modernization of the church began.
1970
Bishop Francis Mugavero rededicated the church.
1980
Extraordinary Ministers of Holy Communion began their ministry in the parish.
September 1983
The Girls’ department and Boys’ department merged onto one school.
1985
Centennial celebration of the parish.
1980’s
Catholic Charities leased the vacant Brother’s Residence.
1986
The Boys’ and Girls’ Schools were combined into one school building.
1990’s
The Little Church, used by the Folk Mass Group, was renovated.
1990’s
The Church Sanctuary was renovated.
1998
Servants of the Lord and the Virgin Matara established a contemplative community in the Convent.
June 2005
Saint Thomas Aquinas School closed.
2006
NYC Department of Education began a 20-year lease on the Girls’ School as an annex of P.S. 207.
2006
Brooklyn Amity School began a lease on the Boys’ School for three years.
2007
Pastoral Council convened Parish Assemblies to gather information for our Pastoral Plan.
2009
Former Brother’s Residence reopens as the Aquinas Center, with meeting rooms for parish use.
July 1, 2009
Midwood Catholic Academy relocates from Our Lady Help of Christians parish to the Boys’ School. Classes will begin in this building in September 2009.
September 8, 2009
The parish’s Main Office, the Office of Faith Formation and the Pastoral Associate relocate from the Rectory to the Aquinas Center. 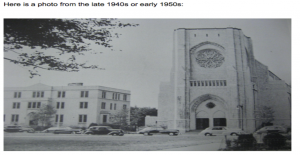 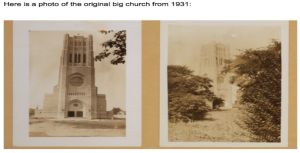